The Seventh Seal starts with Klaus sulking and taking a day off -shocking his butler. But No matter what dreadful truth awaits, a butler always does his duty! We can start guessing from where Klaus got at least some of his values. Of course, Klaus can't lay in bed all day, but in his boredom go terorrizing his servants, poor souls ...

The Seventh Seal, part 3. In London, Dorian has a new treasure in sight - the Liechtenstein collection. See - we really move around. Dorian gets a feel for an unwanted suitor - "But you must understand ... I'm very fond of you." - someone art interested too, but one who can't tell the difference between real and forgery. He gets to show off his skill in stealing - and we are impressed.

Then, to little surprise, Klaus's new mission takes him to Liechtenstein, by tway of Switzerland, for secret KGB accounts. Yes, Mischa is too called home from Sibera. And finally Klaus has to recall the Alphabet ... "Z and I can't investigate 1650 banks alone." Klaus doesn't like crossdressers - "Men dressed like women are abominations! - of course that means we'll have plenty of them. Or more to the point, Dorian, again in his disguise as Countess Powell ... And he pulls it off nicely! "She's ... She's beautiful!" "A raven-haired beauty!" "Like a glamorous movie star!" "And so tall." "That's a whole lot of woman." A man Klaus needs information from falls under Dorian's spell, making Klaus want to enlist "her" ... He's up for a surprise ... Oh well, we get to see Klaus chase Dorian for a change ... "You have a choice. Work for me, or get turned over to the police. What's it going to be?" 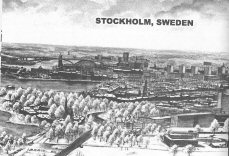 A bit of the usual bickering and Klaus nearly gets Dorian arrested. Dorian is not amused ... "He set me up!" and "You shall pay dearly for this. Very dearly." The mission gets interrupted when an IBC tech gets kidnapped with The Black Box, the one that can save the Soviet military computers about to fail.. So both Klaus and Mischa gets new missions. "Mischa intends to abscend with the technician - to Stockholm!" As a Stockholmian myself, I greatly approve. They continue up to Mora - and Klaus follows.

Mischa lays in wait - and captures Klaus in a sauna! And he's about to get his revenge ... "You'll steam me alive!" Never fear, help is on the way - Dorian. Who find a helpless, tied up Klaus. Out of the ashes, into the fire? Dorian's dilemma ... "Get his clothes off, quickly!"

Finally Klaus awakens and he's very worried on seeing Dorian and the others leaning over them, despite their "reassurances": "I never laid a finger on you!" "I didn't do anything to deserve a court-martial!" "And, I didn't rifle through your wallet!" ...

In a diversion Dorian pretends to be Klaus - and skiis to Norway - in very good style, too! It would make for a brilliant picture if my golden locks were flowing behind me. Alas, he is caught by Mischa.

The black box, meanwhile, is heading for Athens. Off to Greece. Where the Greek KGB agent sends his women to seduce Klaus ... "He's become a bit of a legend. It's said he's never fallen for the temptation of women." Of course, it doesn't work very well ... "You got us in the mood and then you suddeny tied us up!"

Again, Dorian gets to show off his skill with stealing things. "I take what I want. And I'll do whatever it takes." He flees captivity with spoils, including a whole statue! Klaus undercover as a greek fisherman - still looking good! Klaus uses the women to switch hostages. Using that as a distraction he and Dorian breaks into the KGB building again and they get the computer tech out. But Mischa still has the Black Box and leaves for Istanbul. Klaus has to spank one of the women to find out ... "The hardiest part of a woman is her bottom."

Dorian hans Klaus a hostage for his good behavior - Bonham. "Forget about that useless git," Klaus tells Bonham, "and come with me." Bad Klaus. However, Dorian fully intends to interfere. Klaus has called Dorian a common thief and, among other things, Dorian has decided to prove him wrong. Off to Turkey! "I'll show them I'm no common thief! I'll make a grand spectacle of this!" And he does - stealing the black box and leading the hunt up to the roof of the blue mosque!

Mischa gets the Black Box, Klaus hunts him, but Mischa manages to blow Klaus up -or at least the building. Klaus escapes with a broken leg, bloody wounds and several busted ribs - but he does not give up! Dorian gets a bit of an eye-opener (I truly think this is a pivot point of their relationship) and promises to stay out of Klaus way on his missions in the future (though he reserves the right to peep from the shadows). Of course - "Had you been killed, I would have gone to Moscow to avenge you." Klaus isn't too impressed. "I'll avenge myself, thank you." And he does - exploding Mischa's boat with a granade launcher.

Sadly, Mischa wasn't on it ... But Klaus gets the last laugh. "So there you wanker. Ha ha ha ha ha!" It is great to see Klaus laughing, for once.