Author's disclaimer and notes: I don't own them, I just dream of doing so. Feedback is better than red bananas. Corrections to my language (and other things) are welcome. Ask if you want me to archive it anywhere. You may link to this story if you want or to my main page. 2.165 words. Written in April 2007.

If you want you can also read/download the story as a doc file (without graphics).

Summer had come to England. North Downs seldom got these bright, hot days, when the air shivered with sunlight and rain seemed but a distant memory. Dorian had, of course, taken advantage. He lay on a sun chair in the rose garden, next to the swimming pool, naked but for a golden thong, soaking up the warmth and carefully working on his tan. His skin rarely tanned, was in fact far more likely to turn an embarrassing pink, but he had no wish to become some pale Southern Belle. Small, controlled doses of sun kept him from that fate, and also left him feeling relaxed and happy – if covered by the silliest net of freckles that would disappear in a few hours' time.

Dorian was almost alone in the castle, having sent the gang off to London to acquire an instruction manual for his tank. He had had the war machine for three years now – it was high time to put it back into working order. Not that he was completely clear on what he wanted to do with it, yet. He had toyed with the idea of sending his beloved Major pictures of it – perhaps with some delightful, pink ornaments added? Or of Dorian climbing it, driving it or using it for ... something. Scaring away the deer from his garden, possibly? The beasties were hell on his tulips – if only the animals themselves weren't so beautiful he would be quite vexed with them.

In the castle remained only the more ... mundane of his servants. That is, those not in his inner circle. Most of them probably thought he was just a very ... eccentric man. But nobility was allowed, wasn't it? If he wanted to surround himself with so many pretty men and so many works of art and gallivant around the globe to collect more of both one and the other, those were just small peculiarities of his, weren't they? Dorian was, all in all, very careful of whom he hired. It wouldn't do for some investigating reporter to be given access to his life – and he made sure that everyone in his employment knew fully well that to talk to outsiders about him and his hobbies was strictly verboten.

Dorian expected two important phone calls. One from his men in London on the progress of their search and another from an American contact who was working on acquiring access to a charming little painting – a still life with roses and a pistol which, at least to Dorian's un-trained eyes, resembled the one his beloved Wire Rope of Germany seemed so unnaturally attached to. A future birthday gift, possibly. So Dorian had arranged to have a phone next to where he lay – through a series of extension cords. When it rang, he reached out and lifted it neatly off the hook.

"Yes?" he asked, holding the receiver with his left hand while he reached for a glass of iced pear lemonade with the other. A servant had just brought the latter and the side was still foggy with cold.

"Are you Red?" a deep voice growled from the receiver. It sounded vaguely familiar.

Dorian rolled his eyes. Americans! Still, one had to make allowances for them, like one did for children. "Yes, I am."

"Get out of the sun, then!" the voice said and then dissolved into giggles, before the phone disconnected.

Dorian blinked repeatedly, then sighed and hung up. A prank caller! How ... odd. However did they get his number? And such a silly joke. What if he hadn't answered in affirmative? Oh well ... He drank from the lemonade, then lay on the sun chair again, on his stomach this time, spreading his legs to get sunlight on the insides of his thighs.

With a sigh he rolled back , took the receiver again and, with some hesitation, brought it to his ear. "Yes?" he asked, hoping to hear Bonham's pleasant burr. He so adored listening to his second in command talk or sing. Bonham might not be classically handsome, but his voice could seduce nightingales.

There was no reply.

"This is Earl Dorian Red of Gloria speaking," he said, hoping to avoid another Red-joke, if it was the prank caller again.

"Who is this?" he asked, slightly sharper. If no one answered, he would hang up.

"Bo," said the voice. There was some tenseness in it, a hint of ... something familiar, yet not.

Bo? He didn't know anyone named Bo. He wondered a little why he didn't just slam the phone down. This was obviously the same person as before, whoever he was. It didn't sound like a child or even a teenager. Strange. "Bo who?" he asked.

"Don't cry, it'll soon be over." The voice almost broke as it spoke, then fell to another giggle fit before the speaker hung up.

Oh, that had just been lame! Or ... Dorian thought and sat up straighter, Was that some kind of threat? But no. Professionals didn't call up potential victims, tell them uber-lame jokes and giggle hysterically. Dorian then considered some people he had met in the Rogues' Gallery and amended, Not without clarifying exactly what they want, anyway.

So it was with a tiny amount of dread he answered the third time that the telephone rang. "Yes?" he said with forced patience, just on the remote chance that it might be the American or Bonham. He reached for the lemonade again and sucked on the straw.

Unsurprisingly enough, there was no answer.

"The Earl of Red-Gloria speaking."

"That's it!" he growled and consciously slipped into his "impersonating a NATO Major"-personality. "Tell me your name!" he ordered and then, with even more emphasis, "Name!"

Dorian dropped the lemonade glass. It bounced off the sun chair and then crashed on the patio, splashing the slightly sticky fluid up over his leg and lap before running off towards the pool.

"Ma-ma-ma-major?" he stuttered. "Major von dem Eberbach? Is that-is that you?"

"No! I'm a turtle!" came the reply, quite defiantly.

"No! You're supposed to say ..." There was a long pause. "Oh, now I forgot it! It's all your fault!" Now the Major sounded just like himself and very annoyed with Dorian to boot.

"Of course I have! I don't want to die of dehydration!" Which Major Klaus Heinz von dem Eberbach apparently found quite hilarious, for he giggled again.

Giggled! Dorian felt like getting another glass of lemonade, just so that he could drop it again, in sheer astonishment. Klaus could giggle! And he had a very nice, throaty, lovely kind of giggle too! Which Dorian had never dreamed he would ever get to hear, not in a billion years. Which also meant ... "Are you high?" he asked carefully. Not that he could ever imagine Klaus polluting his temple body with something as lowly as drugs, yet ... He could never imagine Klaus prank calling anyone either.

Back to the turtle again ... "Are you at the Schloss?" he asked hesitatingly.

Darn it. Dorian had hoped so. The thought of Klaus out in public while clearly not in his right mind was ... unsettling.

"Wait!" Klaus ordered and then all Dorian heard was a lot of static noise and mutters and – at one point what he was fairly sure was another giggle. Feeling lost – it wasn't as if there was anything he could do to help the Major, with the man in Bonn and Dorian in England – he began to walk back towards the house, gathering telephone cord as he did.

A turtle, though? Oh, this is prime blackmail material. I will be able to use this ... forever, actually. Poor dear ... Hmm ... A turtle on its back can't turn over again, can it? Oh yes, I'll be able to make a good line of that, in the right situation. "Once I have you on your back, my dear turtle, with your legs in the air ..."

"Now I'm a turtle again," Klaus suddenly declared. "Yes, they're here. I saw A by the bus stop and H in the bushes."

"Of course not! They're outside and they don't have any shells!"

KGB might explain this. Somehow. Dorian wasn't sure how, exactly, but somehow. On second thought Dorian turned and walked back towards the pool, laying out the cord again.

"Mischa?" Klaus said, sounding excited. "Is Mischa here? I like playing with Mischa! Can I shoot him?"

"'May' I shoot him?" Dorian automatically corrected. "Can" - I'm sure that you could. "And no, you may not. Not unless he threatens you." He laid back on the chair, stretched out and avoided the wet spot with practised ease. "You like playing with Mischa? How about me? Do you like playing with me, Klaus?"

"I'm not allowed to play with dolls," Klaus informed him mournfully.

Dorian smiled. There didn't seem to be any overwhelming danger with Klaus at headquarters and the Alphabet around. Not even if Klaus currently believed himself to be a turtle. "You think I'm a doll?" He wondered briefly if Klaus knew that "you're a doll" could also be a compliment.

Then Dorian heard rustles, followed by a faint click. "Klaus? What was that? Did you just ... unbutton your fly?" It hadn't sounded quite like that, but a boy can hope, can't he?

"No, silly! I undid the safety of my Magnum."

While "silly" could be considered a step up from "idiotic moron", which had been Klaus's latest endearment for Dorian, the second sentence sort of blotted out the first. Dorian's stomach clenched up and he froze in the process of running a finger up his chest. "Klaus!" he said sharply. "Put your gun down at once! You could ... You could hurt someone with it!" And wasn't that just the stupidest statement he had ever made? Of course Klaus could hurt someone with his Magnum – that was sort of the point with a Magnum.

"Hush!" Klaus said loudly. "You have to be quiet!"

"Why?!" Dorian demanded. "Klaus? What is happening?" Suddenly the funny incident didn't feel funny any longer at all. Not when there were weapons involved. Oh, he should have remembered that when Klaus was near weapons were always involved! "Klaus? Talk to me!"

"Klaus?" Dorian called again, not bothering to keep his voice down since Klaus so obviously forgot to do it himself. "Who is coming nearer? Is it Mischa? Klaus?"

Klaus giggled – and the sound wasn't at all funny now, even if Klaus was obviously enjoying himself. It sounded ... ominous. Like a herald of doom, of the Apocalypse itself. Surely at that sound, the four riders mounted their steeds?

"Hush," Klaus said again. Then, quite unexpectedly, he shouted, "Booom! You're dead!" A series of cracks was heard, followed by something heavy being moved too fast over a wooden floor; rustles and various other sounds.

He pressed the receiver so hard against his ear that it hurt. Vaguely he could hear grunts and distant voices, but he had no idea what they meant and they were driving him batty!

"Z?" Dorian asked, feeling relief like nothing else. "Z, is that you?"

"Lord Gloria? Oh, thank God! I thought it was the Chancellor ..."

He was rewarded with a weary laughter. "We've been searching for him for three hours. Figures that the Major would double back and hole up in our office. He was hiding under his desk. Mein Gott, he was probably here the whole time."

He got another tired laughter. "Let's just say that I think he will be a little more careful who he bums cigarettes from in the future ..." 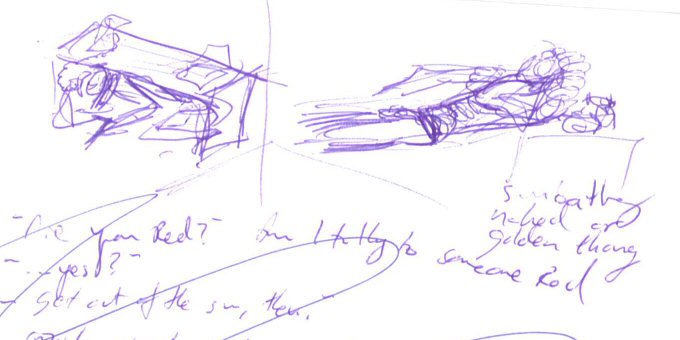