To Hell and Back again

Author's disclaimer and notes: I don't own them, I just dream of doing so. Feedback is better than strawberries. Corrections to my language are welcome. Ask if you want me to archive it anywhere. You may link to this story if you want or to my main page. Crossover with Preacher. 1.687 words. Written in April 2006. Minor change on 070311, to correct error.

This is a birthday fic for Heather Sparrows.

Betaed by Heather Sparrows (yes, I make her beta her own birthday fics). You're the best, Heather.

If you want you can also read/download the story as a doc file (without graphics).

This fic is available translated to japanese by BasilLeaves! Thank you very much, BasilLeaves!

"Major von dem Eberbach ... I'm not quite sure how you got here, but I can't give you what you want. A guard will escort you off the premises."

The room looked like any other office; with a work desk, shelves, diplomas on the walls and even a window. Red and yellow light shone in from the latter and Klaus hadn't looked out, though he did feel a bit curious. However, his current mission demanded his full attention. "I will not leave until you hand over the Earl of Red Gloria to me."

"That would be the former Earl of Red Gloria, Major von dem Eberbach. And we are not in the habit of letting people pop in to retrieve their loved ones, no matter what."

"Yet you brave the pit of Hell itself to free him?"

"NATO needs his help for a very important mission. Top secret. I'm not allowed to discuss it."

"Major von dem Eberbach ... I'm the Angel of Death. Who do you think I would tattle about your petty mission to?"

Klaus shrugged. "I'm here for the Earl. He will return with me."

The being before him made a face of distaste. It was a tall, male humanoid with black wings and black, red-rimmed eyes. Its hair was black too, with odd, blond highlights. "If it has escaped you, Major ñ the Earl is dead. He has been proud and vain; he has stolen and even killed. While his death might have been accidental, he belongs here now, in Hell."

Klaus had been about to say something else, when the angel's words made him pause and reconsider. "Not for his homosexuality, then?"

"I always wondered about that. Regardless, I demand that you bring him to me and let us leave."

The angel snorted. "No," he said. Then he turned his back to the Major. He reached out towards the phone, presumably to alert the Hell Guards.

The Angel of Death laughed. It was a pleasant sound that still made something cold burn in Klaus's heart. Without turning back, the angel said, "Even here we have heard of your legendary skill with your Magnum, Major Klaus Heinz von dem Eberbach, and of your dedication to your work. The former I don't doubt, but I'm starting to wonder if the latter is due simply to mindless stubbornness. I'm an angel. Your Magnum is useless."

Since the angel couldn't see him, Klaus didn't bother to shrug. He did smile though. It was the smile that his Alphabets had dubbed his "Good boy" smile. Had any one of them been present, they would have run for cover. "Maybe," he allowed, though he was loathe to admit that there were jobs not quite suitable for his pet weapon. "Good thing I decided to upgrade, then."

"Rifles are no good either, nor bombs or fire throwers, no nothing."

"I have used all of those during my missions, but for this one I'm sticking to hand guns. Did you ever wonder how I learned to use my Magnum so well, bird boy?"

The big wings shuddered once. "No, you foolish mortal."

"When I was a child one of my uncles came to visit. He isn't actually an uncle, but a more distant relative, from a branch of the family that moved to America a few hundred years back. He sat me on his knee. I didn't like that, but he more than made up for it by letting me play with his guns. Later he taught me to shoot with them. I do prefer my Magnum, but I had a feeling something extra would be needed for this, so I visited Uncle. He let me borrow one of his revolvers. It's a Colt, you know."

"Ja. A Walker Colt revolver. Have a look, Herr Angel. You should recognize it. You watched it be forged."

The Angel of Death stiffly turned back. His already pale face had gone a ghastly shade of ashen. "Your ... uncle ... is the Saint of Killers?"

"That is what you named him, ja. And this little beauty here ..." Klaus ran a finger down the revolver pipe; a decidedly sensual gesture. "... was made by the devil himself for him. Out of metal from your melted down sword, I believe. It will never misfire nor will its hammer ever fall on an empty chamber. No shot it'll fire will miss its mark and no wound it gives will be anything but fatal. Something its maker learned very quickly, didn't he? Tell me ñ did you bury the devil's body there, at the gates of Hell, where Uncle shot him?"

The angel just stared at him, silently working his mouth without uttering a sound. A drop of sweat ran down his forehead.

Slowly the angel lifted a hand and snapped his fingers. The sound echoed oddly in the room, actually growing louder instead of fading. Then a red light flashed once and a tall man with a shock of blond curls appeared by the desk. He looked around for a moment, apparently puzzled by the sudden change of location. Then he went up to the huge painting of Lucifer's Fall on the wall and studied it speculatively.

"He can't see us?" Klaus asked, used to being the absolute centre of the Earl's attention.

"Neither see nor hear us. I wanted a word with you first. About that Colt--"

"Funny, the way Uncle spoke about it, when he came to Hell he wore the clothes he had died in."

"I'm actually wondering about that myself. I'm not sure where he got that cat suit. It looks good on him, though."

"Best not to speculate, I've found. And don't talk about him like that! Well, what did you have to say?"

"Could you put that away first? Please?"

Klaus holstered the weapon, watching with interest how Dorian had pushed the painting to the side to reveal a small safe. He wondered what would be deemed important enough to be kept in a safe in Hell. "Be quick about it, so we can leave," he ordered, not quite sure he wanted to find out.

Klaus drew the revolver again, aiming at the angel's chest. The angel quickly lifted his hands.

"Please, Major von dem Eberbach! I'm the Angel of Death, not the devil! I don't really have the power myself to return someone to life."

Klaus lowered the gun again, about three decimetres. The angel's hands also went down, protectively cupping the area Klaus now aimed at. Not that it mattered much where he aimed, since all shots fired would be fatal, but there's fatal and then there's ... fatal.

"There is a way!" the angel yelped. "But that's the only way. I really have no control over it, please believe me, Major von dem Eberbach."

"Well, that's the only way, I'm afraid, Major von dem Eberbach. Of course ... that would only work if you ... did love him." The angel straightened some. "And I'm not a bloody cry baby ñ I cry blood over the fate of mankind."

"A real man doesn't cry no matter what. Now, tell me exactly what is needed."

"Well ... If you had loved him you could have tried to walk through Hell for him ñ never looking back. If you had managed to do so, he would have returned with you to the other side. Quite simple really. If you ... did love him."

Klaus made a disgusted face. "I followed him here, didn't I?"

"I thought that was for a NATO mission?" the angel said, now looking ever so slightly smug.

Klaus wanted to shoot the creature, he really did. "You're going to force me to say it out loud?"

Next Klaus knew, Dorian was glommed onto him closer than spray-on paint. "Love you, love you, love you!" the Earl sing-songed into his ear, hugging Klaus for all of his worth.

"You said he couldn't see or hear us!" Klaus shouted at the angel. He didn't shoot it, but only because Dorian had attached himself to his gun arm.

The angel stared at them in open-mouthed confusion. "He shouldn't be able to! I don't know what could have gone wrong."

"Fuck this! I have to lead him out and never once look back?" He shoved Dorian off him with enough force to make sure that the Brit stayed away, if only for a few moments.

The angel lifted his hand again and snapped his fingers anew. This time, the office walls melted away to the fiery plain of the Abyss; damned souls in torment, beastly demons and above it all, a screeching laughter that never came from a man.

"Yes. That is the tradition. Though I should warn you ñ no one has succeeded so far."

Klaus snorted and drew himself up to his full height, meeting the Angel's black gaze without fear. "For six years I've never once dared to even hope that he would stop following me. I don't see why I should start worrying about it now. Nor have I even once during those six years doubted that if I gave him the opportunity to ogle my buttocks ñ and perhaps promised him a kiss or two at the end of the journey ñ he would happily follow me to Hell. And most certainly back again."

With one last, icy glare at the Angel of Death, Major Klaus Heinz von dem Eberbach started marching. And he never once looked back. 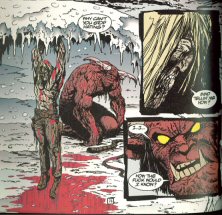 The Saint of Killers. A man so full of hatred that when he entered Hell, the fiery Abyss froze over. The devil himself could not whip it out of him. The Angel of Death ñ who was quite tired of being the Angel of Death ñ then offered the man revenge on the men who had sent him to Hell if the man, in turn, took the Angel's place and became The Death-bringer. He would be the Patron Saint of Slaughter and Assassination and kill for the Lord and in his name. The man said, "Reckon I will." And they rejoiced. The devil's kingdom was reprieved. The Angel's burden, eons old, was gone at last. They yelled with joy ... When what they should have done was wept. For the world. And for the future. Preacher, volume 4, Ancient History. More information about Preacher can be found here.